RubyNation was held this past weekend in Reston VA, and it was a success for the fourth year in a row. For being a (relatively) small regional conference, we consistently get to see quality speakers and draw Rubyists from North Carolina all the way to Philadelphia (and much further, I’m sure). I’ve been every year (it’s just a little over an hour from Baltimore), and I always have a great time. Here is what I thought were the best parts of RubyNation 2011.

Hanging out with friends

We always have a strong contingent of Bmore on Rails folks at RubyNation. This weekend I twice received unsolicited praise that the Bmore on Rails group was “friendly and cohesive” and “one of the more fun local groups”. I’m paraphrasing, but it was awesome to hear that others see us this way. It’s true!

I can’t even count how many colleagues I’ve met at previous RubyNations! I don’t feel like I met too many new folks this year, but it’s still a big part of any local conference to me. If you met me (or even if you didn’t), make sure to keep in touch on twitter!

I was lucky, I had already seen three of the sessions at Bmore on Rails in the last few months (“Fat Models Aren’t Enough” by Jeff Casimir, “Confident Code” by Avdi Grimm, and “KnowSQL: Database Tricks to Make Your Life Easier” by Nick Gauthier). This made it easy for me to see a couple of new talks.

“Git: It’s All About the Trees, Baby” by Scott Chacon

Scott obviously knows git inside and out. The details are complex, and I’m mystified about it on a regular basis, even though I’ve been using it for over 3 years. I love how Scott slows down to ask, “Does that make sense?” after every difficult concept. I took feverish notes and re-read them a few times - after some digestion, yes, Scott, now it does make sense. I think. slides

For some reason, this topic speaks to me. Maybe it was all the shell scripts I wrote early in my career, or my love for the “UNIX way” of building large systems from many small tools. This was one of those talks that probably snuck under the radar, but those who were there know that they took away a ton of knowledge. I’m looking forward to David’s upcoming PragProg book on the subject! slides

It must be tough to be the first session of day 2 of a conference (wait, it is). I wonder how many people were scared off by the thought of this being an “SEO” talk? Well, it was. And it was excellent. To web developers, SEO doesn’t have to be much more than checking off a few boxes. Really - it’s not crazy difficult. Luigi laid out a great plan to help your site be more successful: by optimizing crawling, indexing and ranking. I’ve been forced to learn a ton about this subject while working on replyz.com - we have a footprint of close to 10 million urls, so managing searchability and the sitemaps has been one of my jobs for close to a year. Great job, Luigi! slides

“The JavaScript Renaissance” by Chris Williams

Chris is a showman. Did he really hand out 200 pirate hats? When his speakers weren’t loud enough, did he really voice-over the Numb3rs episode where they explain IRC? And did he really convince a room full of Rubyists that their favorite language has strong competition from other programming languages? Yep.

“Must. Try. Harder.” by Keavy McMinn

Every conference needs at least one inspirational talk. And this one fit the bill perfectly. Keavy’s even-paced delivery and detailed descriptions of the agonies of triathlon training provided a great analogy to our software development careers. The video of the harrowing descent left the room silent for a full minute and a half. Well done!

Jeff Casimir setting up his gear to take headshots

Jeff is the coolest. He gives a brief lightning talk imploring everyone to use their face as their avatar, not a cartoon or a logo. Then he invites everyone to step out into the lobby where he has set up a temporary studio - complete with a backdrop and two remote flashes. Fifty people stepped up and got their photo taken, and Jeff posted the results to flickr the next morning. The next morning. Seriously, this guy is awesome. By the way, are you looking for Ruby or Rails training? Check out Jumpstart Lab. (Also, why are so many folks afraid to step in front of a camera? You know we all can see you right now, right?) 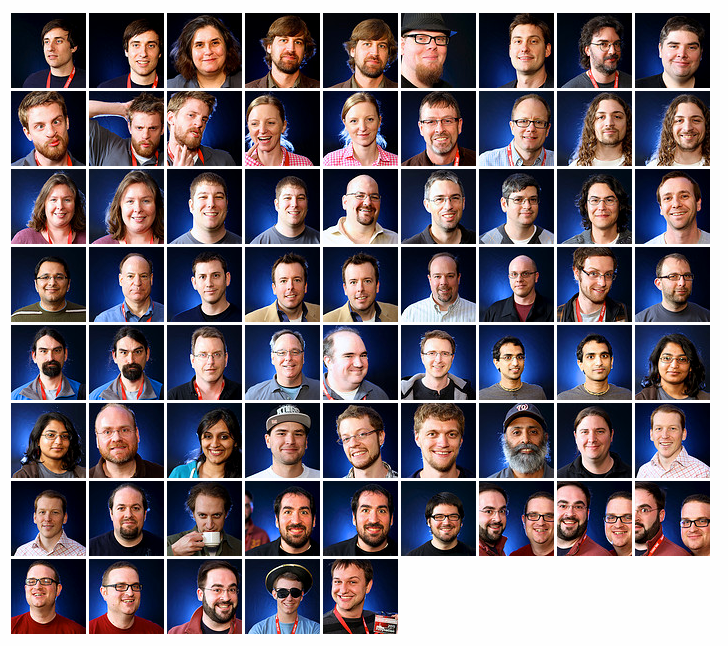 “Your code is awesome. Your copy sucks.”

I love lightning talks - you never know what you’re gonna get, and the investment is low (5 minutes). This year my favorite was about copy writing (that’s the stuff between the tags that the user sees). Andrea from corgibytes let the uber-techie, male-dominated audience know that the words you write matter. I play the role of copy writer for a few minutes (!) every week, and I appreciate raising awareness about this under-appreciated skill.

There was considerably less code hacking this year - but we still fit some in. Paul Barry wrote a Ruby chat server in the few minutes leading up to Nick Gauthier’s talk. And I told Andy Atkinson my idea for listing members on bmoreonrails.org, and he ran with it and started the feature! (hopefully we’ll have members listed on the site this week)

Github sponsored the drinks, Living Social sponsored the food. And it was at a Westin. Do I need to say more? If you were there, I’d love to hear your thoughts on the mini-burgers (I thought they were the coolest things ever).

It was another fun local conference. Congrats to Gray Herter and David Keener and David Bock, and everyone else who organizes RubyNation every year. Keep in mind that these were my favorite parts of RubyNation - yours will most likely be different. What did you enjoy most about the conference? What did I miss?