About two years ago, the B’more on Rails crew started a fun tradition here in Baltimore. We call it Open Source Hack Night. It’s a group of hackers working on various software projects - together.

Before the last meeting, @subelsky asked about Open Source Hack Night on Twitter, and suggested that a more thorough description might encourage new folks to stop by. Well, I kinda love OSHN and want to see it grow, so here is that description. Thanks, Mike, for the encouragement.

Once a month, B’more on Rails hosts Open Source Hack Night, a casual meeting of coders from a variety of backgrounds. We hang out for about 2 hours, hacking on whatever is fun.

In short, B’more on Rails members. Most often, Ed Schmalzle and Chris Strom are there. Sometimes I am (I should be, I work right down the hall at 410 Labs). It’s really loosely run, we try to just casually introduce ourselves, and lately we’ve been trying to collect everyone’s Twitter handle, expertise, and project names on a whiteboard.

It’s usually dimly lit (nighttime!), and sometimes we play music. The Beehive has one large table that can seat about ten folks, and plenty of other seating. Sometimes it’s quiet and serious, but it’s often fun and maybe even a little silly sometimes. 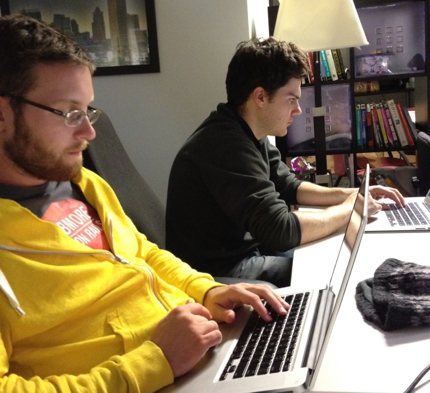 What do folks work on?

In short, whatever they want. A few people generally bring ideas with them, and then recruit others to help or just follow along with their work. If you have an idea for a new project, or a bug fix or feature to add to an open source project, you’ll probably find at least one person who is either capable of helping you, or at least following along.

What languages do I need to know? Is it Ruby-centric?

No. Although it was originally titled “Ruby Open Source Hack Night”, we have shed the language from the name as we want the event to be inclusive of whatever type of project you’re working on. You can be sure to find more than a few Ruby and JavaScript devs at most OSHNs, but you’ll also occasionally run into Perl guys, iOS devs, and sometimes a random Java developer. We all use Github to share code.

Do I have to pair-program?

No! While this is a great opportunity to pair with someone on something you’re really into, you can work however you want.

Is it better for learners or teachers?

Both. If you know alot about something cool, others will want to learn from you and see you work. If you are hungry to learn something new, speak up, and someone there probably has done it, and can show you around.

Why should I attend?

I hope you’re already convinced to attend! But if not, here are some bulleted reasons:

Excellent! Feel free to let everyone know what your plans are. Introduce yourself on the meetup.com mailing list (email to ruby-85@meetup.com), and announce what you’d like to work on. Alternately, we often use Twitter to plan. Follow @bmoreonrails. Tweet your project ideas the day before or the day of OSHN - we’ll try to re-tweet your plans and ideas so more people can see what others will be working on.

The next OSHN is this week, Tuesday November 22 from 7pm to about 9pm. We meet at the Beehive in Canton, all the details can be found on the meetup page. Please RSVP so we can have enough pizza for everyone.

See you there. Be sure to introduce yourself!